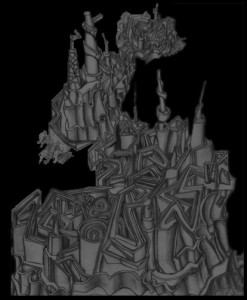 Language is a kind of code dependent upon the life rhythms of the species which originated the language. Unless you learn those rhythms, the code remains mostly unintelligible.

Images and text flickering across screens are driven by engines of code: texts of other languages. Code pulls text and other signs from databases, gives it form, parses, formats and orders language for our cognition. Languages are mobilised in concert for this function, authored by writers of disparate talent. Content, in order to pass before our eyes, depends on a hierarchy of codes grounded fundamentally in the material and the semiotic:  at the strata of the interface of material object and signal,  the sub-alphabetic, lowest resolution linguistics preferred by our technology; at the strata of  the precise, still small systems that move, process, display data, words and pictures composed in the sprawling, nuanced tongues that are the province of natural human expression;  at the strata of the metalanguages with which the natural systems, and their precursors, are analysed, mapped, and mined.

An edifice of language has been built far out  into aether from all efforts in these intertwined strata of code: thousands of languages variously commensurable and incommensurable, coherent and otherwise, concise and profligate, comprehensible to billions, human and machine, or none, poured into an every-expanding architecture, codes parsed by ordered signs made of switches and signals: a world-spanning bridge and  cathedral of code.