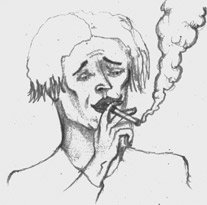 ‘Absolutely. He is pathos epitomised. I mean this is almost cruel. In this dark and deeply… blackly psychological and harrowing dramatic work, Valquez stands alone as a sort of cheap avatar of a , a quasi-sociopath, a sort of social cripple, untouched by the humanity of those around him..’

‘I think here it might be said that the writer has elegantly captured the essence of failure, a sort of control, a character by whos poignant shortcomings the weaknesses of others are virtually as nothing.’

‘One imagines him thin, drawn and large-pocked.’

‘In a slipping into a sort of crude burlesque, here we are presented with a horrific frailty of spirit, a banality of character unprecedented in the modern theatre.’

‘..the ultimate, or perhaps just the penultimate, anti-hero, a man brilliantly riddled with neuroses and awkwardnesses,  furnished with full cognizance of the true state of affairs by virtue of chance, he is as helpless as those who, knowing nothing, are at least engaged with the world..’

‘Yes, yes, unable even to identify his erstwhile and omnipresent nemesis he stumbles on, purblind, gaining no ground, drawing no nearer to the heart of the matter. Charged with a.. a sort of boundless apathy, a bubbling, fermenting, churning listlessness, a passionate ambivalence..’

‘..unsubstantial and incoherent, a hollow mannerist without charm or feeling..’

‘gauche and ephemeral, he is a portrait of man as a vacuum,  a vacuous miasma, a seething fabulous virulent nullity..’

‘..destined, one might think, not for success, naturally, or, even a sort of brave defeat, but simple enduring sameness…’

‘A turgid continuation, without release, epiphany or enlightenment..’

‘A lesser Sisyphus, a pyrrhic failure.. destined for repeated humiliation, frustration piled on frustration, a champion of inefficacy, a perpetual and thorough disappoint..(click)

Rummaging under pillow, hits something hard, picks it up and presses the loud stop button of an old fashioned tape recorder, the voices stop.

‘They’re right. Dammit they’re right. I mean, this isn’t a novel, but somehow they’ve understood me implicitly.I am that ineffectual character. I’m not real. I’m not having any impact on the world, I’m just flotsam. I just take whoever’s hand is on offer, without regard for where it leads me. When I do act under my own volition rather than just letting the wind blow me where it will its invariably to follow some impossible fantasy, some minutely concieved fantastically hopeless quixotic dream without the slightest chance of realisa…’

Valquez:          Wh.. (sound of furniture falling as Valquez leaps at, and stops, a second tape recorder concealed behind a painting.

CUT TO HOTEL LOBBY. MUZAK IS PLAYING, BUZZER ON DESK SOUNDS WITHOUT PAUSE.

Be with you in a moment sir.

BUZZER STOPS AND STARTS A FEW TIMES THEN CONTINUES

Just a.. (tartly) alright sir, how can I help you.

Excuse me, I’d like to know exactly what is the meaning of this please.

Excuse me. I’m a little bit upset. I’m not normally one to.. but you see I’ve had rather a nasty shock.

Sir, could I ask you…

Sir we cant reveal that..

Look I found these in my room.

There was one under my pillow..

Well someone must have put them there. Who cleaned the rooms? Was it a man, a man in his late thirties, tall, handlebar moustache, sinister air?

Pushes a series of numbers on a telephone..(beepbeepbeep)

Excuse me, sir, I couldn’t help noticing you… you… well, I I mean,  are you alright?

I.. I suppose I’m just a little..bit demoralised.

Is there some way I can… help?

No, no, it’s just I  found these tape recorders.

Well.. this has  happened to me  before, I mean through no fault of my own.   I mean it wan’t of course quite the same thing but I’d have to be insane not to at least  consider it in the same light.  Look, let me.. let me buy you  a coffee..

I was quite ordinarily confused by  the sound of a dripping tap which I later found to be dripping in the kitchen, adjacent to which my bedroom was, if you…. It was my error of judgement, I mean, I’m not denying that, but you see for some time I was convinced that  this sound was a couple,  kissing one another just outside my room. It sounds like an inconsequential thing I know, but over time it actually became very upsetting, particularly since I myself was alone. It got so that I would  have to check check fifteen or twenty times a night and every time of course it was the same as the last – there was nobody there at all.

The tap was by a quirk of acoustics not audible from the hallway and I would stand outside perplexed. It went on that way for months.

Do you crave security?